In recent years, the Internet has become part of our daily lives. Most Spaniards have a connection at home and, when they leave, they are permanently connected through their mobile devices. According to the OpenSignal study, though we do not have the best quality of Internet in the world, Spain offers a high coverage and availability of access to Internet via 3G and 4G networks, as well as an average high speed. With an availability of 90,77 % and an average of speed of 16 megabytes per second over mobile networks, Spain occupies the number 22 position in the world ranking.

However, the WiFi connection is the favorite of users worldwide when they connect from a smartphone or tablet. We spend about 57% of our time connected to a WiFi network, and even though telecommunications companies offer good quality for the connections used in households and through mobile devices, we cannot say the same thing when talking about Wifi in hotels. When the Spaniards travel throughout the national territory, we have many difficulties to find a free connection and enjoy an uninterrupted service. Currently, Spain is among the worst positions in the world ranking, namely in position number 43 of the 50 countries that have been part of the study of HotelWifiTest. 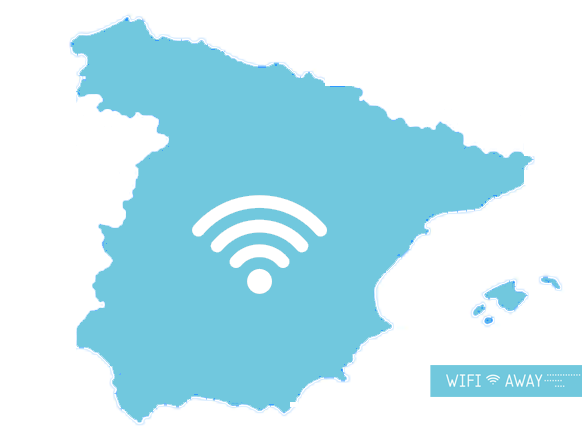 According to the above mentioned study, the quality of the Internet WiFi in Spanish hotels possesses 32% of “Wifi Quality” and 62% of Free Access. In general, hotels in Europe offer a “not so good” quality and only 75% of them offer their customers this service for free. According to the study, “In Europe, it is 33% more likely that a hotel has adequate WiFi than in the United States; but in the United States, it is 14% more likely that a hotel will offer free in-room WiFi”. In any case, only cities like Barcelona or Madrid are in positions that exceed half of the table, with a quality and a higher percentage of free wifi.

This means that many people, who must travel for work or pleasure, often find it difficult to enjoy a good Internet connection which is also included in the room price paid.

Many of these users turn to the Internet USB sticks offered by telephone companies. But as we write in another post: everyone hates USB sticks. Installation problems, slowness, and lack of coverage lead many users to despair.

In order to solve this problem, Wifiaway offers to individuals and hotels adapted solutions. That is, an Internet service without waiting, no contracts, no permanence, without installation and without unnecessary formalities, and that the internet users can use at home or in the office, in hotels, at the beach or in the car. Rent a portable Wifi device —that fits in a pocket— with up to 50 GB of data and speed similar to that of optical fiber, and be able to connect up to 10 different devices.

The portable Wifi is an easy and economical way of improving the valuations of hotels of all over the range in TripAdvisor and Booking, as well as the user satisfaction. Hotels in the whole Spanish geography offer their clients “Wifi in the City” free of charge, as an additional service to the Wifi in the hotel; and they observe results in the webs of recommendation, spending approximately the same that they pay for soaps and combs given away to their users.

This website uses cookies to improve your experience while you navigate through the website. Out of these, the cookies that are categorized as necessary are stored on your browser as they are essential for the working of basic functionalities of the website. We also use third-party cookies that help us analyze and understand how you use this website. These cookies will be stored in your browser only with your consent. You also have the option to opt-out of these cookies. But opting out of some of these cookies may affect your browsing experience.
Necessary Always Enabled
Necessary cookies are absolutely essential for the website to function properly. This category only includes cookies that ensures basic functionalities and security features of the website. These cookies do not store any personal information.
Non-necessary
Any cookies that may not be particularly necessary for the website to function and is used specifically to collect user personal data via analytics, ads, other embedded contents are termed as non-necessary cookies. It is mandatory to procure user consent prior to running these cookies on your website.
SAVE & ACCEPT